he historical, cultural and gastronomical itineraries to discover the best of Romagna 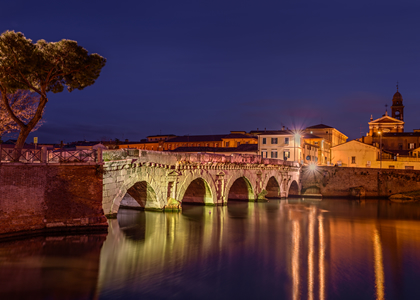 The main attractions
If you think of the riviera adriatica, Rimini at once comes to mind, the capital of the seaside holidays on this coast. But apart from the sea, Rimini also offers tourists, both in and out of season, a fairy-tale atmosphere, the magic of legend, the mystery of history. Travelling through the malatestiana province, just a short way from the sea, you can discover interesting places rich in environmental, historic and artistic beauties.

Rimini
Situated in the heart of Italy and provided with excellent connections to the main European cities, Rimini is the symbol of diversified tourism and the ideal place to enjoy it. Rimini is both ancient and modern, folkloristic and cultural, spectacular and artisan. The Master of the Italian Film, Federico Fellini, immortalised its atmosphere in his films and exported its legend throughout the world.

San Marino
Situated 750 metres above sea level, it is the oldest and smallest Sovereign State in the world, a state that has maintained its freedom and independence over the centuries. On the top of the Mount Titano rise its three towers Guaita, Cesta and Montale. These are the symbol of a Republic that, amongst its many glories, boasts a noteworthy philatelic and numismatic history and tradition, which are greatly appreciated throughout the world.

Santarcangelo
Sant'Arcangelo is a doorway to the past, a special village, a gem of the so-called "Valmarecchia of the poets". It's here that the poets of the "Circal de giudeizi" meet under the aegis of the movement's leader, Tonino Guerra. Not to be missed are the Rocca Malatestiana, the Convento dei Cappuccini, the 19th century fish market, the arch, the square named after Pope Ganganelli, the "mysterious" tuffaceous caves and the artisan shops selling wrought iron and rust-printed fabrics.

San Leo
San Leo, the historic capital of Montefeltro, is situated in the heart of the Valmarecchia, on a 650 metre-high hill. Apart from the fortress, the Pieve and the Duomo, the village is also renowned because it hosted the mysterious and fascinating "alchemist" Count Cagliostro, who was imprisoned in San Leo's fortress and died there in 1795.

Verucchio
The village of Verucchio dominates the splendid landscape of the Valmarecchia. Not to be missed are the Rocca, the Collegiata dei Santi Martino e Francesco d'Assisi and the Archaeological Museum.

Gradara
Gradara is an ancient village enclosed inside a long city wall where the impressive and spectacular castle, a superb example of military architecture, completes the medieval centre. The fortress was completed by the Malatesta between 1307 and 1325 and has subsequently been restored several times. According to the legend, Gradara, the home of the Malatesta family, was the scene of the tragic love story between Paolo and Francesca, as immortalised by Dante, "The trembling mouth, kissed me..."

Recommended hotels on the Romagna Coast

Hotel Blumen
Direct access to the Beach...... The three-star Blumen Hotel is situated a short distance from...
Viserba

Hotel Daniel's
Open from May to September, the Daniel's Hotel is ideal to spend your holidays in Riccione, the...
Riccione